​​The CEOs and directors of these large powerful corporations know that continuing on with world fossil fuel economic growth means the end of humanity and most (if not all) life.

How can they be committing such an evil?

They are not being stopped or even help accountable. Governments support them and even give them subsidies to continue ​​increasing their fossil fuel production.

​​However the huge exponentially increasing rate of industrial output by staying on increasing fossil fuel industrial output (until civilization collapses) is for the time being more than from switching to zero carbon energy.
Business as usual can only lead to total climate change planetary catastrophe ending humanity ​and almost all life. It is in fact an intentional biocide plan.

The May 2016 US EIA International Energy Outlook ​​

The so called historic 2015 UN Paris Agreement on examination is a global death sentence, because the UN Climate Secretariat projected that the 2015 national (non binding) emissions targets would lead to increased emissions by 2030, and the UN update of May 2016 gave the same result- more global emissions in 2030.
​
This is obviously the worst ever crime against humanity and the ​​greatest evil possible.
The big multinational banking and fossil fuel ​corporations are as guilty as hell. The fossil fuel corporations have known for decades that global warming is  real and the most destructive reality if not mitigated. They continue to conspire to block mitigation at every level and region. The fossil fuel damning evidence April 2016 Smoke and Fumes video Center for International Environmental Law Smoke and Fumes.

'​On planned policies, rising fossil energy use will lead to irreversible and potentially
catastrophic climate change' International Energy Outlook (IEA) World Energy Outlook 2012 warning. The same kind of policy plans can be found in the 2012 energy outlook of the US Energy Information Administration, the Exxon Outlook for Energy and the BP Energy Outlook 2030
Click on image (right) for PDF slide presentation combining the 2010 Energy Outlooks: International Energy Agency,  Exxon, and BP.
The controllers of the world economy and energy - plan to keep the world dependent on fossil fuels, with no loss of the fossil fuel domination of the world energy market share. 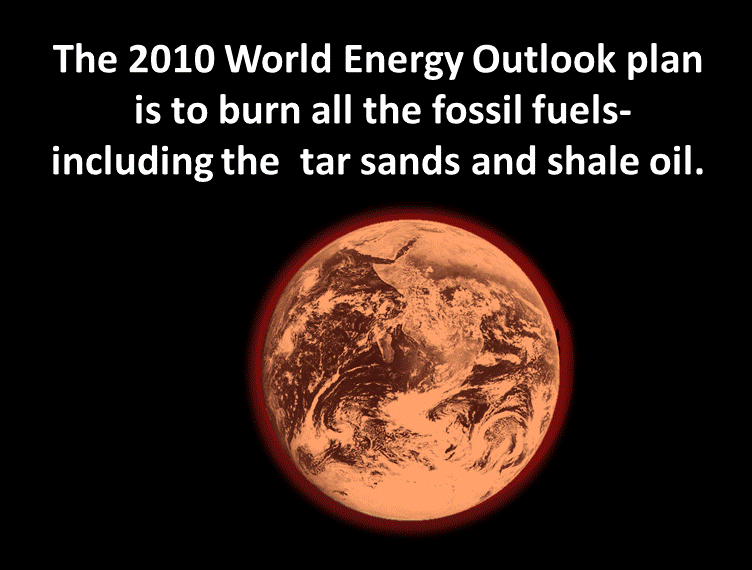 If global emissions continue to increase instead of reversing well before 2010,global climate change planetary catastrophe is certain.
​
​The IEA says we are on a track for at least a 6C global warming by 2100 and are rapidly locking ourselves into a situation where over 2C is impossible to avoid.
A 6C warming by 2100 is planetary catastrophe, but it is also an eventual commitment to 12C because of the ocean heat lag. ​

​​​​We cannot afford to delay further action to tackle climate change if the long-term target of limiting the global average temperature increase to 2°C, as analysed in the 450 Scenario, is to be achieved at reasonable cost. In the New Policies Scenario, the world is on a trajectory that results in a level of emissions consistent with a long -term average temperature increase of more than 3.5°C. Without these new policies, we are on an even more dangerous track, for a temperature increase of 6°C or more (by 2100).
​ Int. Energy Agency World Energy Outlook 2011 Exec Summary
Global Suicide Global Energy plan
Without further action, by 2017 all CO2 emissions permitted in the 450 [atmospheric CO2 concentration] Scenario will be “locked-in” by existing power plants, factories, buildings, etc.(IEA World Energy Outlook Key Graphs)

Suicide Plan
In its 2010 world energy outlook the IEA had said that peak easy oil was passed in 2006 and the days of cheap oil are over. However that meant the end of easy to get oil, not the end of oil production, which would maintain output from unconventional sources, such as tar sands and shale oil.

Estimated potential oil from tar sands, shale oil, and coal to liquids that are all being exploited already are each enough to replace the conventional oil being burned for energy as shown in this 2008 IEA graphic.  ​​ 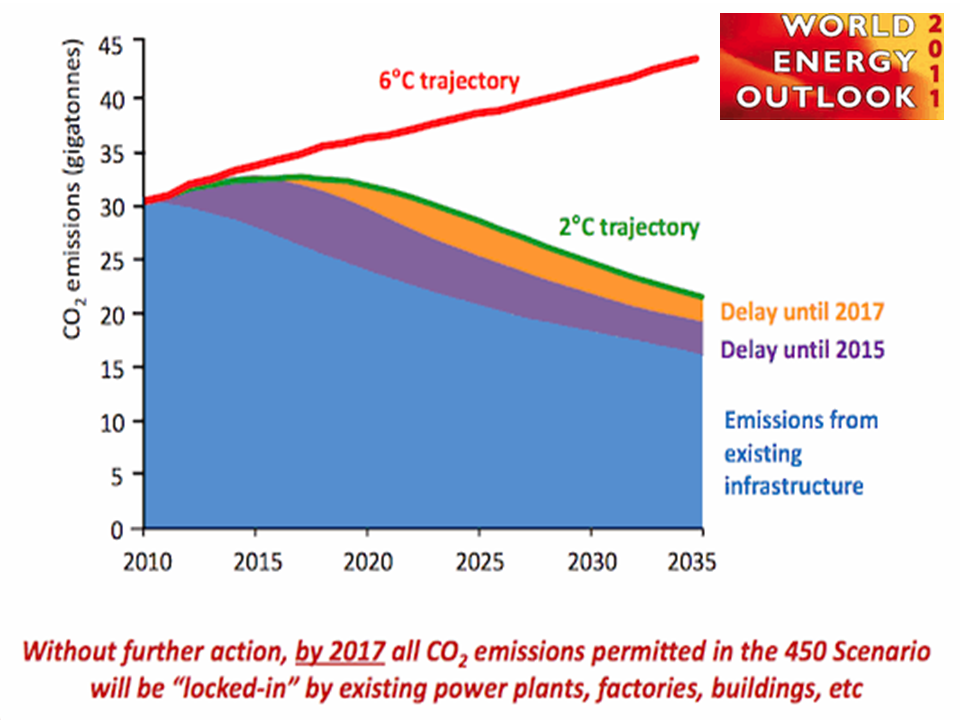 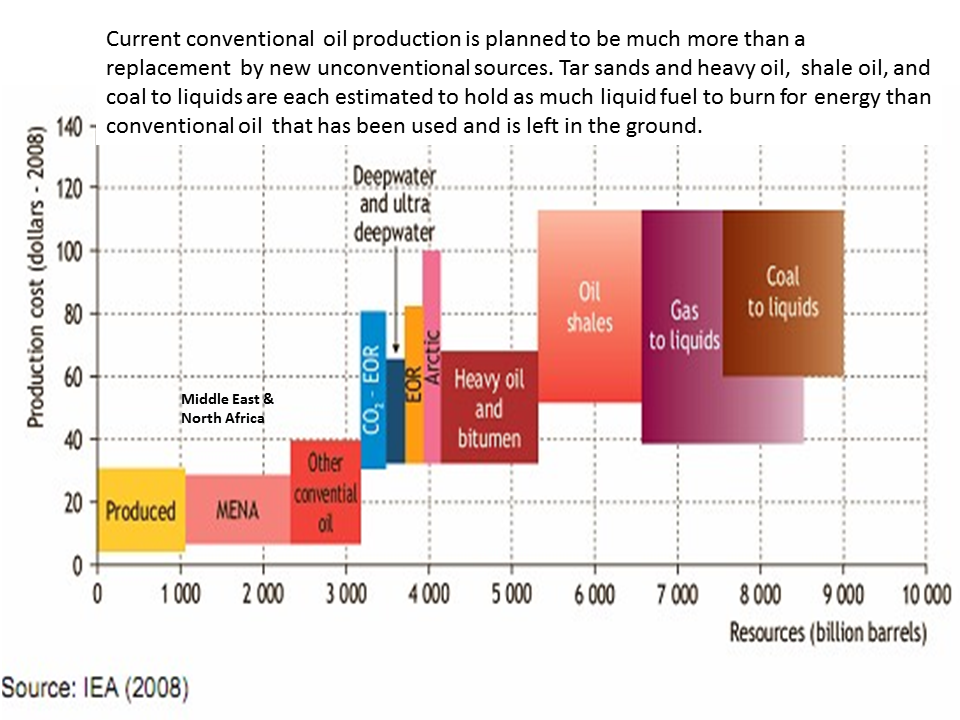 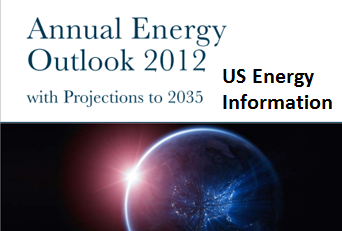 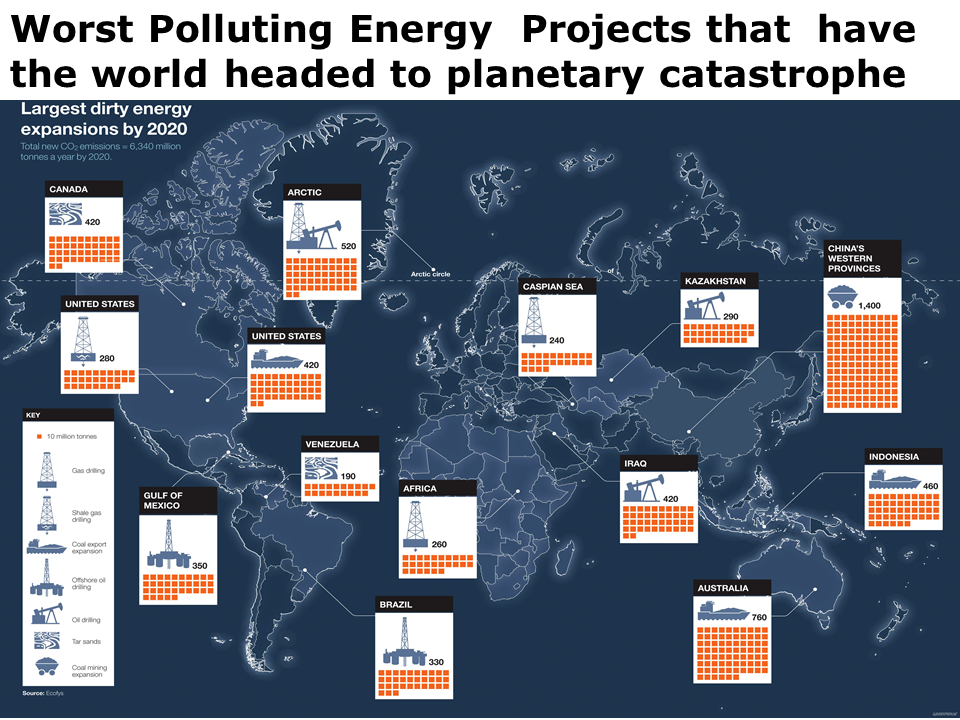 213 Greenpeace
​ Point of No Return
PDF
In 20009 climate research centers warned that at a 3C warming all crops in all regions would have declined below today's output. The IPCC AR5 says that will happen from a 1C warming. World Agriculture will collapse with all regions in decline by a 3C warming. The end of agriculture is the end of the world for us.

Research has determined that at a 7C warming most of the world would not allow humans to survive. It would be a hostile lethal planet for humanity. ​​
The 2015 Un Paris Agreement. National INDC emissions targets  (Intended Nationally Determined Contributions) condemns  humanity to an unlivable global warming of 3.5C by 2100 which is over 5C after 2100. 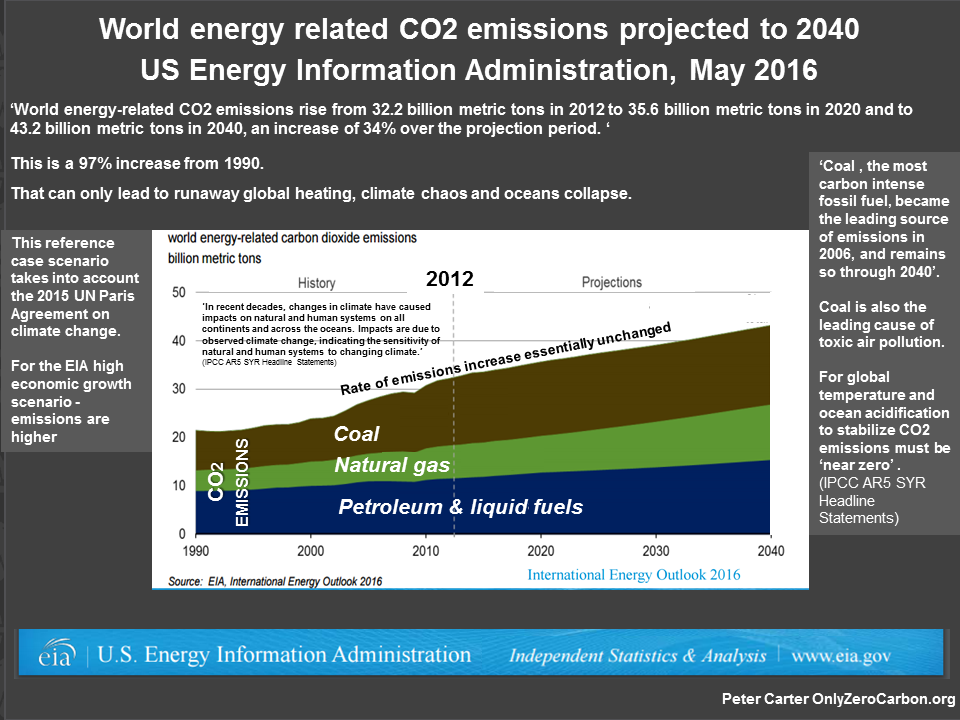