Zero carbon in the first 1990 IPCC assessment for 350ppm CO2
​Interestingly the very first 1990 assessment reported that to stabilize atmospheric CO2 at 350ppm CO2 could only be done with zero carbon emissions. So here we are 25 years later with atmospheric at 40pppm ans knowing it must be reduced to 350ppm or less.
​
Zero carbon in the 2014 IPCC AR5 assessment
​
The ​​​2014 IPCC AR5 assessment was very clear on zero carbon (near/virt​ual zero carbon, this being the best we can achieve by replacing all fossil fuel energy. It was widely reported by the media.
​
'Con​​centrations by 2100 are characterized by ... emissions levels near zero GtCO2eq or below in 2100'.
(PCC AR5 WG3 SPM)
​
'The CO2eq emissions are brought to near or below zero by 2100 in the majority of the scenarios reaching concentrations of ​about 450 ppm CO2eq by 2100'. (IPCCAR5 Ch.6 Exec Summary). The 2014 Emissions scenarios are called RCP scenarios. The best case scenario RCP2.6 is the only one not
​above 2.0C of warming by 2100.

'​Stabilizing greenhouse gas (GHG) concentrations at any level will
require deep reductions in GHG emissions. Net global CO2 emissions,in particular, must eventually be brought to or below zero'. (AR5 Ch6.1)
​
Emissions reductions of this magnitude will require large-scale transformations in human societies, from the way that we produce and consume energy to how we use the land surface. The more ambitious the stabilization goal, the more rapid this transformation must occur. (AR5 Ch6.1)
​
​Bringing energy system CO2 emissions down toward zero, as is ultimately required for meeting any concentration goal,
requires a switch from carbon-intensive (e. g., direct use of coal, oil, and natural gas) to low-carbon energy carriers (most prominently electricity,but also heat and hydrogen) in the end-use sectors in the long run. ​​(IPCC AR5 CH6 6.3.4.)

Zero carbon in the 3rd TAR IPCC assessment
​The third assessment published a very useful graphic that shows the long lag times of climate system inertia. It also shows what happens when CO2 emissions are cut to near/virtual zero (95% cut
​in this case).

​​
​1000 years after starting to cut carbon emissions to virtual zero:

​​Here is the quote from the Technical Science report of the 2007 Intergovernmental Panel on Climate Change's (IPCC) Fourth Assessment (AR4) that could not be more clear and definite that only zero CO2 emissions can stop global warming - increasing.

​​IPCC 2007 Assessment WG 1 Science FAQs. Question 10.3
If emissions of Greenhouse gases are reduced, how quickly do their concentrations in the atmosphere decrease?

​​While more than half of the CO2 emitted is currently removed from the atmosphere within a century, some fraction (about 20%) of emitted CO2 remains in the atmosphere for millennia.
​
Because of the slow removal process, atmospheric CO2 will continue to increase in the long term even if its' emission is substantially reduced from its present levels.

In fact, only in the case of essentially complete elimination of emissions can the atmospheric concentration of CO2 ultimately be stabilized at a constant level.

​​Today there is a general agreement with James Hansen that to avoid global climate change catastrophe the atmospheric CO2 concentration must be brought down below 350 ppm. This is why the global 350.org movement is demanding an emergency zero carbon response by governments.

The science today shows that only zero carbon emissions can stabilize atmospheric CO2 concentration for the long term.

We cannot possibly get the atmospheric CO2 concentration down to 350 ppm or below without achieving zero carbon emissions, and this has been known
​for many years.

Zero carbon from the IPCC 2014 AR5 assessment
​
Next is shown the best and worst case IPCC scenario from a study used
​​​​for the ​2014 AR5 assessment.​ The scenarios have been changed and are called RCPs. The best case RCP is RCP 2.6 (or RCP 3 PD) and the global warming is limited to about 1.5C and over the very long term declines to 1C. CO2 emissions decline to reach zero in about 50 years and then go negative. This is obviously what the world should be planning for.

​​This shows mitigation by stopping industrial fossil fuel and cement emissions, but no the the other GHG emissions. CO2 emissions have to cut to zero and in addition some CO2 would have to be removed, so called negative emissions.

​​Replacing all fossil energy with clean zero carbon (everlasting energy) is feasible and the only future we have.
​​​ 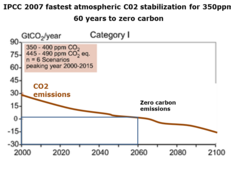 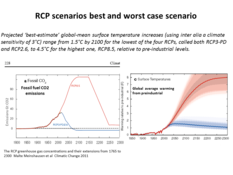 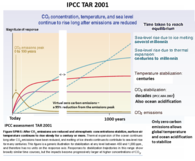 IPCC 2001 on inertia and commitment 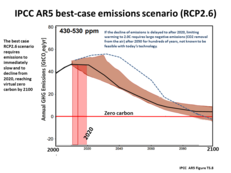 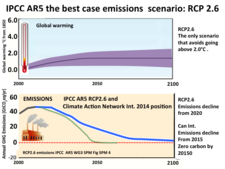 This graph of fossil fuel CO2 emissions ad energy intensity, from the IPCC AR5 WG1 is interesting and important. Improving or lowering the intensity of the amount of energy per unit of GDP is a favourite of many corporations and governments. It implies or assumes that if we burn fossil fuels more efficiently it will help mitigate climate change
​by emitting less carbon per unit of fossil fuels burnt for energy. The science of zero carbon shows this to be the most dangerous nonsense.
​
The AR5 graph compares the best case RCP2.6 based on rapid emissions reduction aimed at zero carbon with the best case energy intensity approach. Energy intensity does not help. 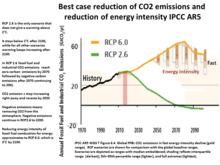 Climate change scenarios.
Up to the 2014 AR5 the IPCC scenarious (SRES) for projections future warming were based on GHG emissions, but this changed wit the AR5 GHG conctration based scenarios (RCPs). Thes RCP scenarios do not account for amplifying carbon feedbacks (2014 Uncertainties in Climate Projections due to Carbon Cycle Feedbacks).   ​