There are two ultra long-term / super slow carbon cycles by which the planet takes carbon out of atmospheric carbon dioxide.


The land sink forms what we call fossil fuels in the depths of the soil and rock.
The same sort of thing happens deep below the ocean floor where dead marine organisms form limestone and dolomite rock which in the course of ages of time has formed rock on land.
​Constant warming and acidification of the oceans by constant emission of carbon dioxide is already having a profound effect on ocean chemistry and marine life.

If the pouring out of carbon emissions continues the effect on the oceans will be catastrophic to life both in the oceans and on land.

As it is shell making and bearing marine organisms that stars the long process that sinks carbon in the ocean sediment acidification that impairs this capacity is another positive feedback that will operate over many thousands of years.
The oceans are presently exerting a large offsetting effect to global land surface warming. The latest estimate is that the oceans have absorbed over 90% of the additional heat generated in the lower atmosphere by the combined effect of all industrial greenhouse gas emissions.

Warming the oceans results in an ocean based carbon feedback effect. This is because warmer water absorbs less carbon dioxide from the air as cold water does.

The oceans have also absorbed about 40% of the carbon dioxide industrial emissions, resulting in the steadily increasing acidification of the oceans. 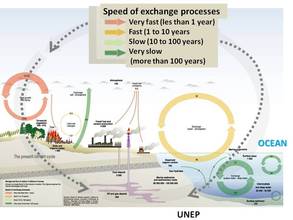 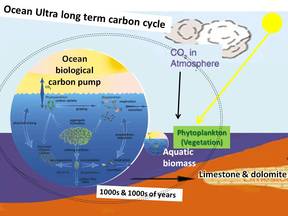 The oceans are the most important intrinsic part of the global climate system.
The World Ocean is in fact the ultimate control of of the planet's climate.
​
This most important 2010 ocean research ​confirms this well.

Carbon dioxide emissions affects the oceans in two big ways. First it causes ocean warming (like the other GHGs).
In addition to, and independent of carbon dioxide's warming effect, carbon dioxide emissions acidify the oceans.
Even if global warming did not exist we would still have to stop carbon emissions to stop the oceans acidifying more and more.
As it is if ocean acidification continues it will feed back to the climate system further accelerating the rate of global warming and climate change.
If ocean warming and acidification continue the ocean ecosystem will eventually collapse and most marine life will die.
The ocean over hundreds of years will become a vast decaying sewer that would poison the air leading to an ecological collapse on land.
This graph published by the IPCC in its 2001 assessment shows all of the essential aspects of the climate change science that all results from the fact that about 20% of all carbon dioxide emitted to the atmosphere lasts their radiating heat and acidifying the oceans for 1000 years.
The reason CO2 lasts so long in the atmosphere is that CO2 can now only be removed from the carbon cycle, by the ultra slow ocean process.
The ocean carbon sink process is initiated and depended on the plankton 'biological carbon pump'. 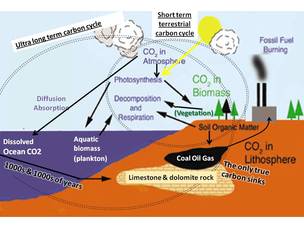 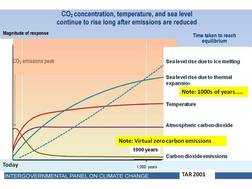 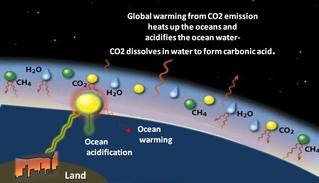 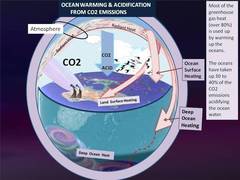