Fact (IPCC 2007) : Only zero carbon can stabilize atmospheric CO2
and so stop global warming and climate change
​ and ocean acidification ​ continuing to increase.

This is confirmed by Dr.Susan Solomon in a paper published Feb 2008 Irreversible climate change due to carbon dioxide emissions.

Our planet is being pushed down hill by the quantity of additional greenhouse gases constantly being pouring into the atmosphere and it is being loaded up with carbon that will last 'forever'.

This rapidly increasing atmospheric CO2 load is also rapidly acidifying the oceans (as well as warming the oceans).

Published climate assessments and reports
explaining how
​only zero carbon
can stop global warming increasing.
Research published since the 2007 IPCC assessment has confirmed the fact that only zero carbon emissions can stop the atmospheric carbon concentration from continuing to rise.

A paper published by K Caldeira and D Matthews in Feb 2008 (Geophysical Research Papers) using a climate model found that for each additional increment of CO2 to the atmosphere there was a corresponding increase in the global temperature and to avoid additional warming we have to avoid additional carbon emissions.

They advised eliminating carbon emissions and that we should be also looking at removing carbon from the air. Roger Pike Jr. a US climate change expert agreed.

Our results suggest that future anthropogenic emissions would need to be eliminated in order to stabilize global mean temperature.

We show first that a single pulse of carbon released into the atmosphere increases globally averaged surface temperature by an amount that remains approximately constant for several centuries, even in the absence of additional emissions. We then show that to hold climate constant at a given global temperature requires near-zero future carbon emissions. Our results suggest that future anthropogenic emissions would need to be eliminated in order to stabilize global-mean temperatures. As a consequence, any future anthropogenic emissions will commit the climate system to warming that is essentially irreversible on centennial timescales.

Notably stabilizing global temperature present day of the year 2005 levels required emissions to be reduced to near-zero within a decade.

We have shown here that the climate warming resulting from CO2 emissions is not a transient phenomenon, but rather persists well beyond the time scale of human experience. In the absence of human intervention to actively remove CO2 from the atmosphere [e.g., Keith et al., 2006], each unit of CO2 emissions must be viewed as leading to quantifiable and essentially permanent climate change on centennial time scales.

"We have to bring down CO2 emissions to zero " Professor Hoegh-Guldberg  International Program State of the Ocean,  20 June 2011

IPCC 2007 WG 1: Frequently Asked Question 10.3
'If Emissions of Greenhouse Gases are Reduced, How
Quickly do Their Concentrations in the Atmosphere Decrease?
While more than half of the CO2 emitted is currently removed from the atmosphere within a century, some fraction (about 20%) of emitted CO2 remains in the atmosphere for many millennia.
In fact, only in the case of essentially complete elimination of emissions can the atmospheric concentration of CO2 ultimately be stabilized at a constant level. All other cases of moderate CO2 emission reductions show increasing concentrations because of the characteristic exchange processes associated with the cycling of carbon in the climate system'.

It follows that the same applies to ocean acidification. Only zero carbon emissions (elimination of emissions) can stabilize ocean acidification.
The IPCC AR4 says that 'at least 50% below 1990 levels are needed by 2050 with additional global emission reductions beyond 2050 towards a zero carbon economy  by the end of the centur'y.
The 2C target Background on Impacts, Emission Pathways, Mitigation Options and Cost  Prepared and adopted by EU Climate Change Expert Group ‘EG Science’ 2008. ​
A study using the Canada climate model published in 2007 found zero carbon was necessary to limit global warming to 2C.
​
Our results suggest that if a 2.0C warming is to be avoided, direct CO2 capture from the air, together with subsequent sequestration, would eventually have to be introduced in addition to sustained 90% global carbon emissions reductions by 2050. GEOPHYSICAL RESEARCH LETTERS 2007.  Long term climate implications of 2050 emission reduction targets. Andrew J. Weaver. 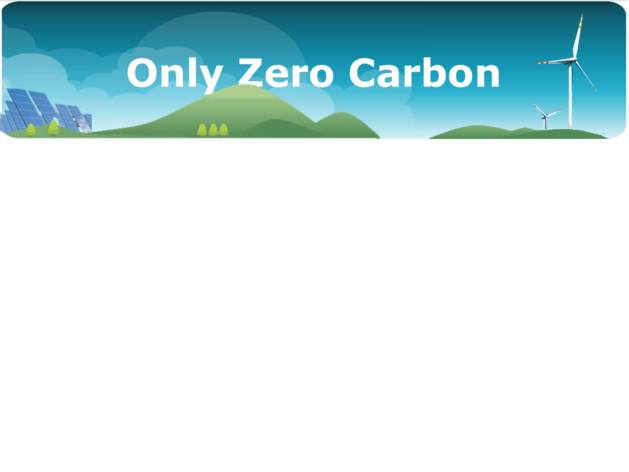 Reports
The single most important and definite scientific conclusion of the entire 2007 Intergovernmental Panel Climate Change (IPCC) is that only zero carbon emissions could stabilize atmospheric carbon dioxide levels. This momentous scientific finding of certainty is being ignored and so we headed for total catastrophe.
IPCC 2001

​​Atmospheric CO2 stabilization can be reached only with an emission scenario that eventually drops to zero.
Carbon emission reductions of 50% do not lead to long-term stabilization of carbon dioxide, nor of climate, in either of these models, as has also been shown in previous studies (e.g., Weaver et al., 2007). It is noteworthy that the Bern model has weaker carbon-climate feedbacks than the UVIC model; nevertheless both models show the need for emissions reductions of at least 80% for carbon dioxide stabilization even for a few decades, while longer-term stabilization requires nearly 100% reduction. Very similar results were obtained in other test cases run for this study considering peaking at higher values, or decreasing at rates from 1 to 4% per year (see also Meehl et al., 2007; Weaver et al., 2007). Figure 2.3 shows sample calculations evaluated in Meehl et al. (2007) using three different models for various stabilization levels. Figure 2.3 shows that stabilization levels of 450, 550, 750, or 1,000 ppmv require eventual emission reductions of 80% or more (relative to whatever peak emission occurs) in all of the models evaluated.
​Thus current representations of the carbon cycle and carbon-climate feedbacks show that anthropogenic emissions must approach zero eventually if carbon dioxide concentrations are to be stabilized in the long term (Matthews and Caldeira, 2008). This is a fundamental physical property of the carbon cycle and is independent of the emission pathway or selected carbon dioxide stabilization target. Box 2.1 discusses how emissions of non-CO2 greenhouse gases could affect attainment of stabilization targets. 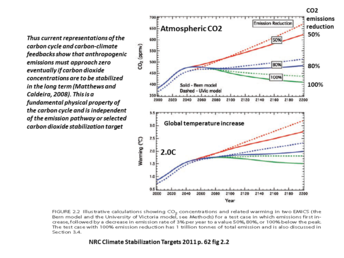