The most recent scientific publication confirming zero carbon is by the US National Research Council.
Climate Stabilization Targets 2010​
It can be downloaded at the National Academies Press.
National Research Council (US) August 2010.
Climate Stabilization Targets: Emissions, Concentrations, and Impacts over Decades to Millennia. Emissions, Concentrations, and Related Factors

​​Studies over the past five years or so using many different carbon cycle models have improved our understanding of requirements for carbon dioxide stabilization. This is because of more detailed treatments of carbon-climate feed backs, including the ways in which warming decreases the efficiency of carbon sinks as compared to earlier work (e.g., Jones et al., 2006; Matthews, 2006).

Thus current representations of the carbon cycle and carbon-climate feed backs show that anthropogenic emissions must approach zero, eventually if carbon dioxide concentrations are to be stabilized in the long term (Matthews and Caldeira, 2008).

This is a fundamental physical property of the carbon cycle and is independent of the emission pathway or selected carbon dioxide stabilization target.

Early work on stabilization using relatively simple models suggested that slow reductions in emissions could lead to eventual stabilization of climate (e.g., Wigley et al., 1996). But recent studies using more detailed models of key feed backs in the ocean, biosphere, and cryosphere, have underscored that while a quasi-equilibrium may be reached for a limited time in some models for some scenarios, stabilizing radiative forcing at a given concentration does not lead to a stable climate in the long run.' 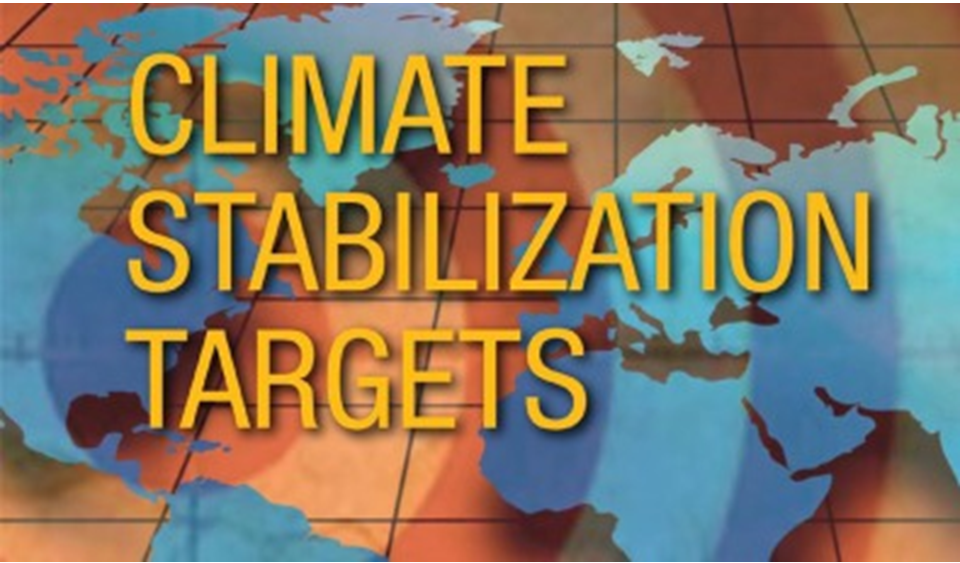 These are the figures that accompany the NRC text above.

Cautions-
They are all based on non emergency possible scenarios of reducing CO2 emissions.
The models in (c) include some carbon feed backs but they do not include the largest feed backs from Arctic permafrost and methane hydrate.

The solid lines are one model and the dashed lines another model. (University of Victoria Canada)

The first figure (opposite) is aimed at different stabilization atmospheric concentrations of CO2, the lowest being 450 ppm.

Even a (non emergency) zero carbon policy being applied by 2020 leads to a higher global temperature than the 2020 temperature.
​
These are scenarios aimed at different degrees of global heat radiation increase.
​
Notice that CO2 emissions are cut to zero followed by negative emissions. In this particular scenario it is being assumed that the technology to remove a billion tons of carbon from the air will be available.

We must aim to get to zero much faster to avoid catastrophe. 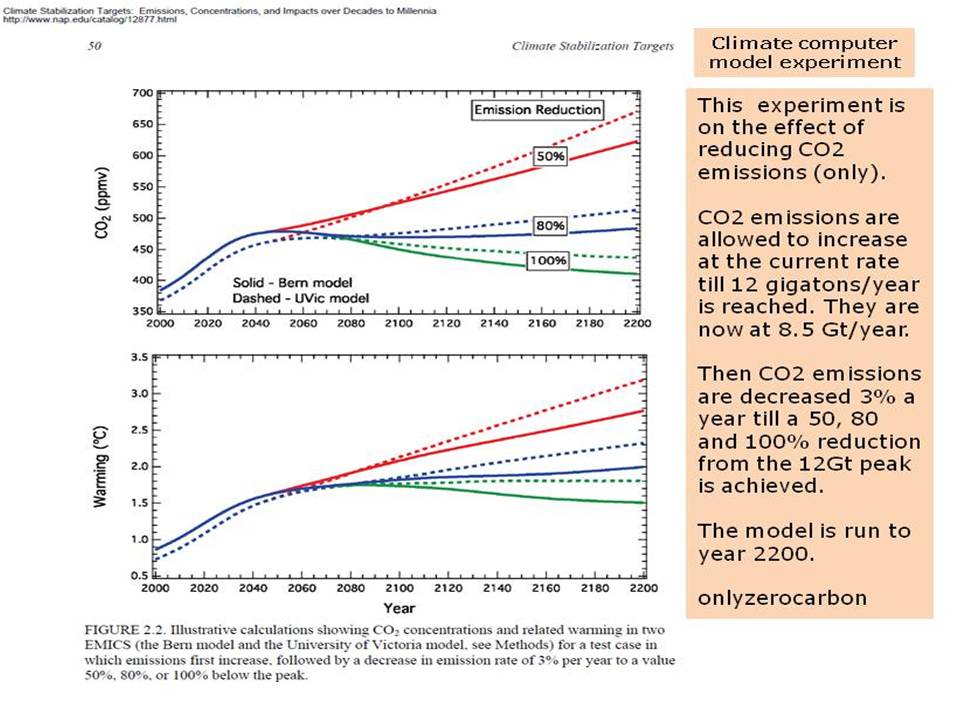 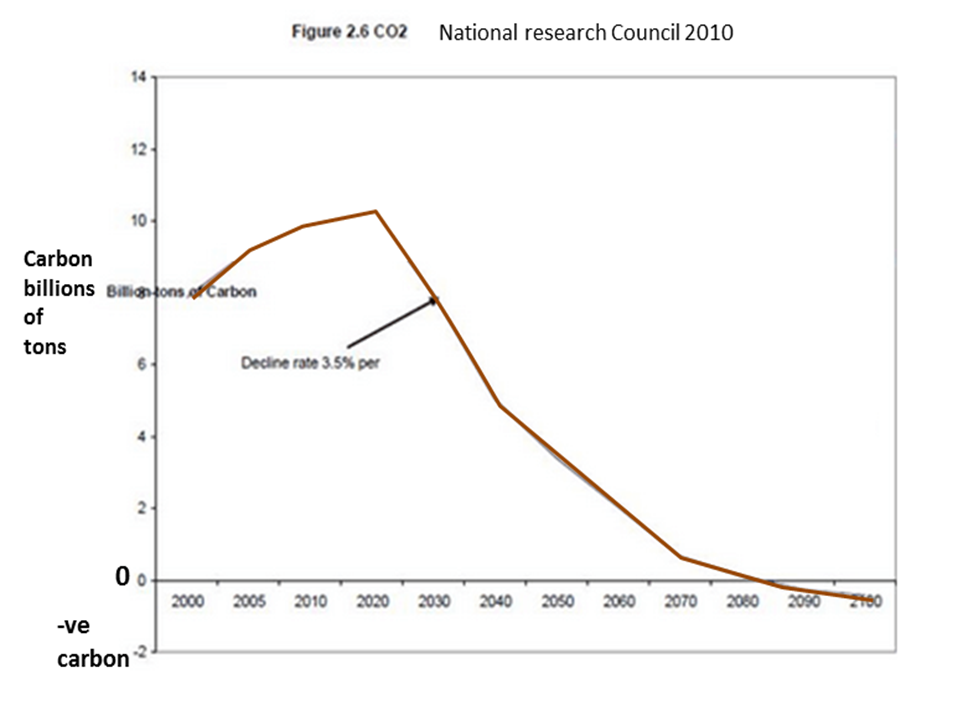 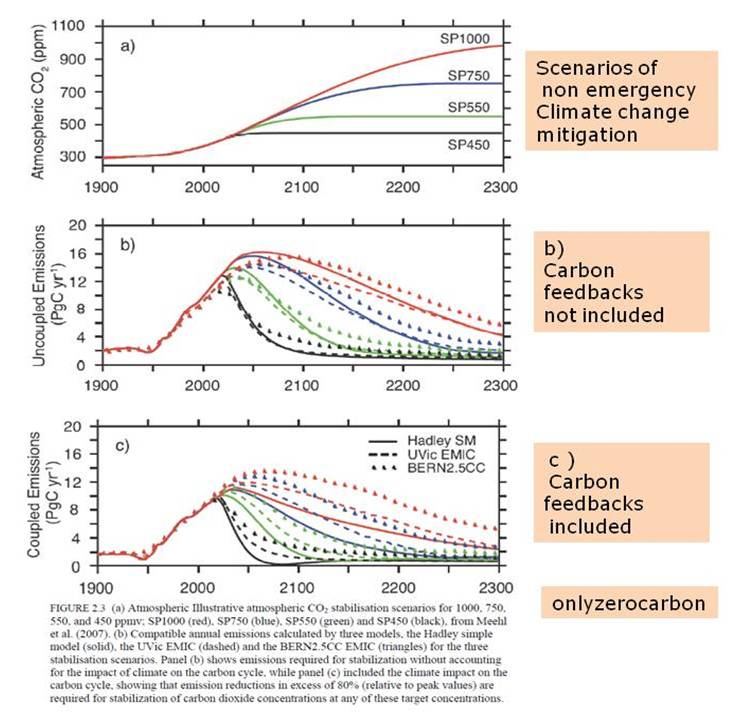 Some greenhouse gases and aerosols are retained form days to years in the atmosphere after emission. [..]

In sharp contrast, some greenhouse gases have biogeochemical properties that lead to atmospheric retention times (lifetimes) of centuries or even millennia. These gases can accumulate in the atmosphere whenever emissions exceed the slow rate of their loss, and concentrations would remain elevated (and influence climate) for timescales of many years even in the complete absence of further emission.

The removal of anthropogenic carbon dioxide from the atmosphere involves multiple loss mechanisms, spanning the biosphere and ocean.

While some carbon dioxide would be lost rapidly to the terrestrial biosphere and to the shallow ocean if human emissions cease, some of the enhanced anthropogenic carbon will remain in the atmosphere for more than a thousand years, influencing global climate (Archer and Brovkin, 2008). The warming induced by added carbon dioxide is expected to be nearly irreversible for at least 1000 years (Matthews and Caldeira, 2008; Solomon et al., 2009),

Global carbon dioxide emissions have been increasing at a rate of several percent per year (Raupach et al., 2007)