These are the two fundamental (should be obvious) essentials of global climate change mitigation and our survival. Stop putting carbon into the air and start taking carbon out of the air. We can do both by a number of ways.

However of emissions are not peaked (to decline) by 2020​​ negative emissions will be required and the longer the delay in peaking the more CO2 would have to be removed.

Removal of tens of Gtons of CO2 per year is not feasible and it would have to be continued for hundreds of years.
​
The environmental movement is understandably opposed to the very idea of extracting carbon direct from the air on the basis it is geo-engineering or it will make individual behavior change less likely. The fact of the science is that zero carbon will have to include include a capacity for negative carbon if required in the future.
It was established by the science many years ago that atmospheric CO2 concentration could not fall unless CO2 emissions stopped. The latest IPCC assessment said that the long term atmospheric CO2 could not be stabilized without stopping emissions.
It has been known for may years that all the world's energy needs can be met by zero carbon (alternate renewable) energies. In fact  zero carbon energy potential is many times than all the fossil fuels being burned.

1. Stop putting carbon ​into the atmosphere
​
2. Start increasing the Earth ncarbon cycle's capacity to take and store carbon from the atmosphere
​
Agricultural  conversion to organic regenerative farming
(like permaculture) ​or agro-forestry is the first essential, doing both of the above.
Nature Journal October 2009 Climate Cruch Sucking It Up.

Caution is warranted in taking values as targets for decision-making.

Targets can all too easily be used to justify continued environmental degradation on the basis that it is within an acceptable range (Nature 461, 447–448; 2009). That's especially true of long-term goals, whose chances of being met can't be measured by present-day behaviour.
To have any chance of stopping global warming from increasing nations must plan to stop the emissions of all long lasting (in the atmospshere) greenhouse gases- confirmed by IPCC 2014 AR5. This is not impossible, it does not mean the end of civilization (global climate change does). That's because it is just a matter of switching technologies and chemicals to zero carbon and non toxic alternatives that exist already.

We are told that to reduce emissions would be very costly. This is the biggest climate change lie out there and most people have fallen for it.

It would not cost anything. The truth is developing any new technology is a huge economic boost.
The global zero carbon development and re-development would be the greatest economic and employment boost ever.

There is in addition a huge immediate cost saving from stopping the toxic air and water pollution of fossil fuels. The cost to our health and from health treatment is enormous.
Amongst scientists who have publicly recommended a zero carbon response for years to the public are Bill Hare and Hans Schellnhuber of the Potsdam Climate Institute (German). They are both top long-standing climate change experts. (See report and the 1C graph below and click image for the World watch State of the World 2009 on climate change by Bill Hare). Please note anything higher than 1C is not safe and is disastrous for billions of the most climate change vulnerable with respect to terrible losses of their water food and health. 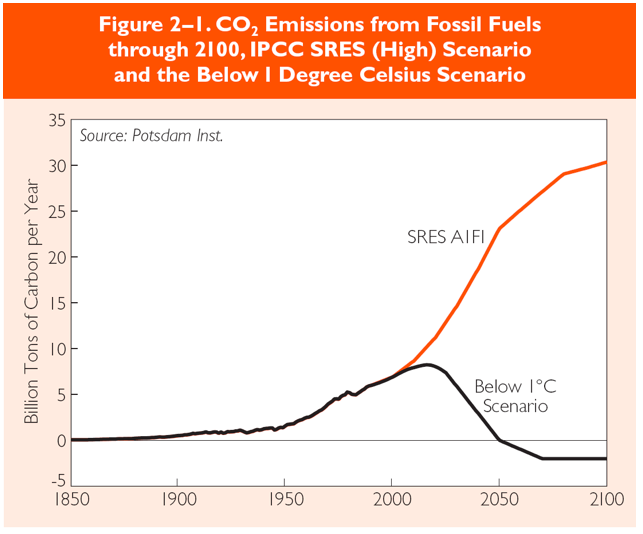 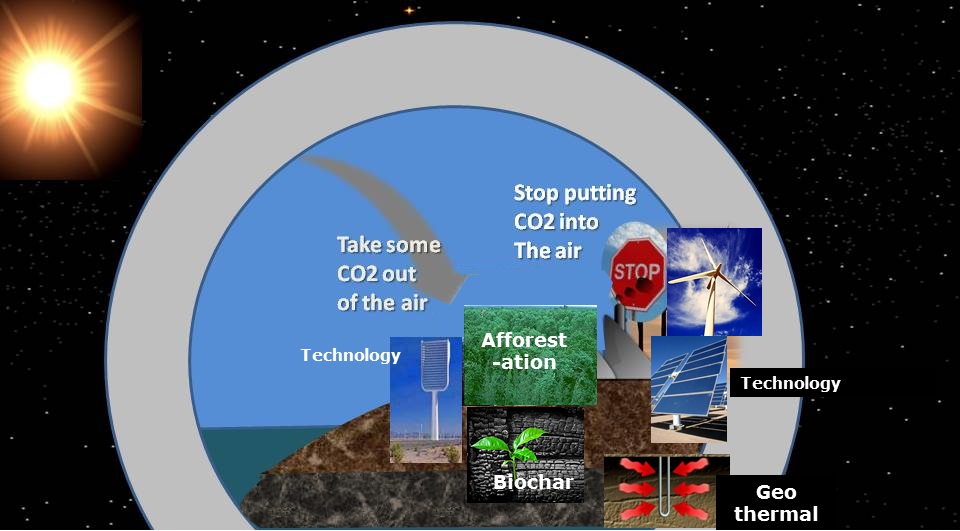 ​​This is absolutely not what decarbonization is according to the climate system science- that demands zero carbon emissions.

​​Using energy more efficiently is most important, but we have to totally convert our energy supply so that we don't burn any fossil fuels for energy.

June 2016 IRENA  ​​The Power to Change: Solar and Wind Cost Reduction Potential to 2025

​​3 Aug 2015 ​​Sucking carbon from the sky may do little to slow climate change and is no help for rapidly increasing ocean acidification and de-oxygenation.

This is promoted by science and government as a way to achieve atmospheric CO2 stabilization. It is not. ​This industry cannot be allowed because with it we will not achieve zero carbon. Its promotion relies on assumed big success of  carbon capture and storage (CCS).  CCS is a failure despite large public investment. It cannot possibly work for much carbon or for long. ​Burning any small scale biomass only recycles biomass carbon, that has been stored by green plants, faster back to the atmosphere -than if the biomass had been left. An EU study looking into  how effective carbon  neutral wood energy would be, was surprised to find that felling trees emitted a lot of CO2 fast by disturbing the forest floor high carbon content letter. All things considered on carbon- the trees are best left alone.

Burning trees and plants to mitigate climate change is the worst idea possible. ​​

​​So burning wood or other biomass for heat or cooking has to stop to achieve zero carbon. These CO2 sources also include black carbon (soot) which has been  found to be second only to CO2 as a source of global warming emissions.
​
​Geo-engineering carbon
​Though it has always ​been necessary to draw down some CO2 from the air to achieve zero carbon, geo-engineering for CO2 removal cannot in any way prevent or delay planetary catastrophe without emergency conversion of all industrial fossil fuel energy to clean zero carbon energy. 2015 research finds it does not offer any remedy for the rapidly increasing ocean acidification and de-oxygenation from industrial CO2 emissions. A 2015 NAP long report does not find any feasible mehtod outside of the natural carbon cycle to remove the large amounts of CO2 for 1000s of years (that would be needed with continued fossil fuel emissions on the horizon.

How are we doing on decarbonization? ​​
Very badly. A 2012 Price Waterhouse Cooper analysis ​says we are headed for 6C by 2100 and that the decarbonisation rate required for a  2°C world has not been achieved in a  single year since World War 2. (Note the 2C policy target is certain catastrophe.)
​
​How fast can the world decarbonize?
Nearly all science sources give a minimum of 50 years​.
​The best case IPCC scenario (RCP 2.6) is over 50 years.
​The best published is 25 years illustrated by
​ Clean Air Task Force literature review 2011 (image opposite).

​​But most studies assume a 50 year time frame at the least,
​​like the October 2013 report which concluded- while more ​research is
​needed, existing scenarios show that it is technically and economically feasible
​ to reduce emissions to zero for roughly 90% of current sources of  GHG emissions
​ with technological options that are available today and in the near future,
​by Ecofys ​Feasibility of GHG emissions phase-out by mid-century 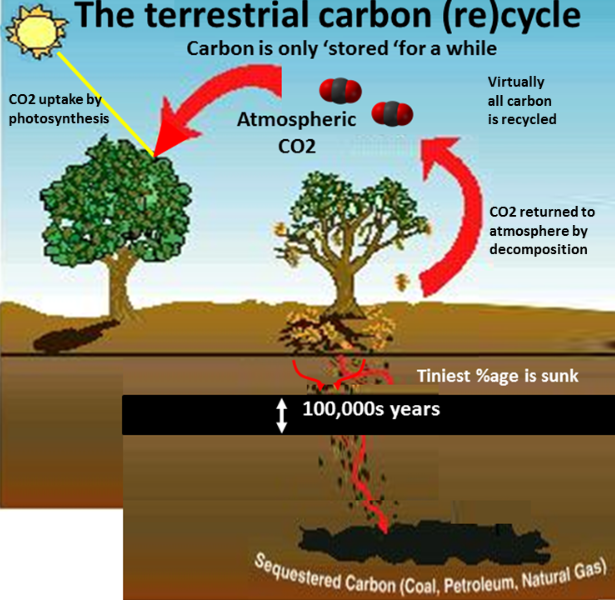 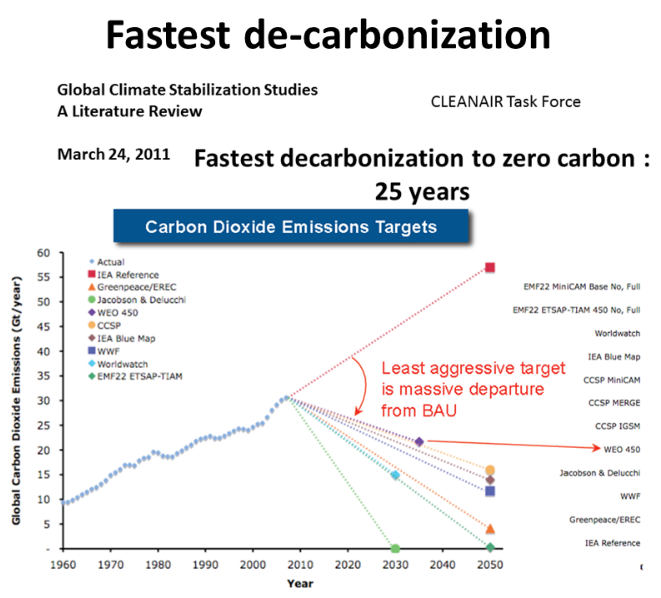 The world's worst coal fired power plants(Interactive) have to be phased out -closed.

​​2015 NRC Climate Intervention:
Carbon Dioxide Removal & Reliable Sequestration (2015 US National Research Council)
This report includes:
There are only two to safely and surely remove carbon from the atmosphere: biochar and wood construction.
​
International biochar initiative​
​
​​​Direct A​​ir Capture (DAC) & utilization/sequestration of CO2.
As essential to use for zero carbon, it will be required to achieve zero carbon emissions- even with 100% replacement of all fossil fuel energy with renewable energy, because the best we can do is virtual zero or 90-95% reduction of emissions.​ This is possible but needs a lot of energy on a global scale- that means the most rapid research, development and global deployment (RDD) of non polluting renewable energy.
​
Fossil fuel carbon capture storage (CCS)​ = fossil fuel boobdoggle.
​
29 Mar 2016 NYT  SaskPower Technology to Make Clean Energy From Coal Is Stumbling in Practice​

​​26 Oct 2015 Slow SaskPower carbon capture performance costing millions
​
Feb 2015 US big FutureGen 2.0 has been abandoned because the US cannot afford it. ​The FutureGen (1.0) project was officially launched by the G.W. Bush administration in 2004 to produce so called clean coal power. It was abandoned because it did not deliver on clean coal and was far too costly even as a US public private partnernhip.
​
​This still appears to be favoured by scientists and governments, because it routinely included in list of options for climate mitigation. How ever it should be no part of mitigation. After decades of R and D it is still unproven, though it is assumed to be a practical proposition. ​It requires more energy to operate and adds greatly to fossil fuel energy cost. At its theoretical best it could never get us near to zero carbon. It is a deadly idea because it is a boondoggle being used to prolong the use of fossil fuels.
​
​Biomass combustion with CCS.​
Pollution charge The surest fastest way to de-carbonize is to charge the full full pollution costs of large emitters, which is inaccurately referred to as a carbon price or tax.

​​Fossil fuel divestment is a global program started by 350.org proving to be effective in discouraging this most destructive type of investment 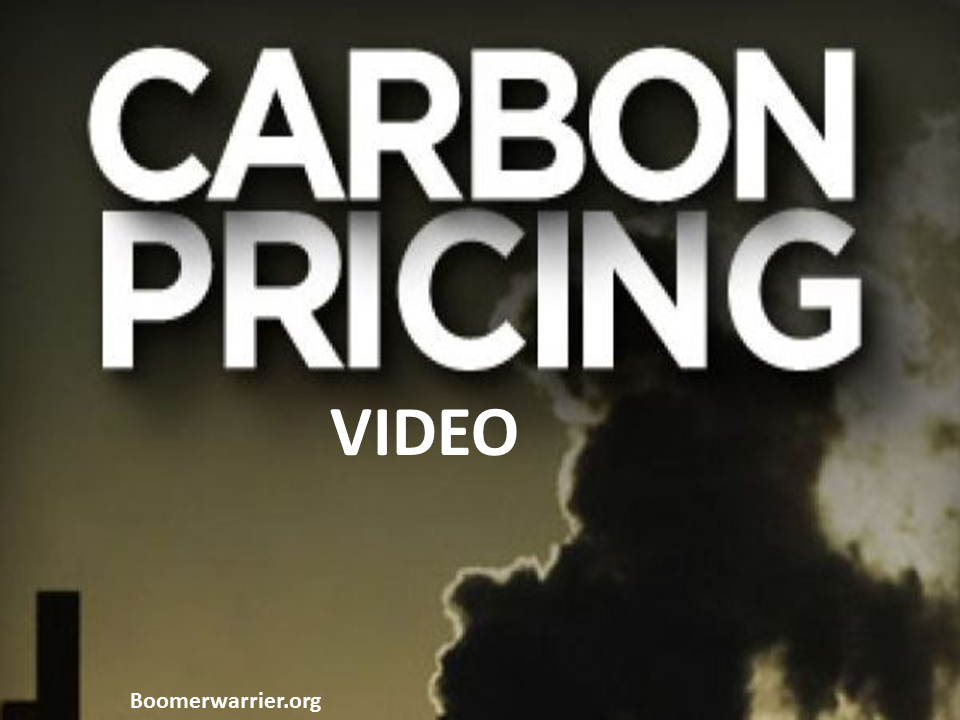 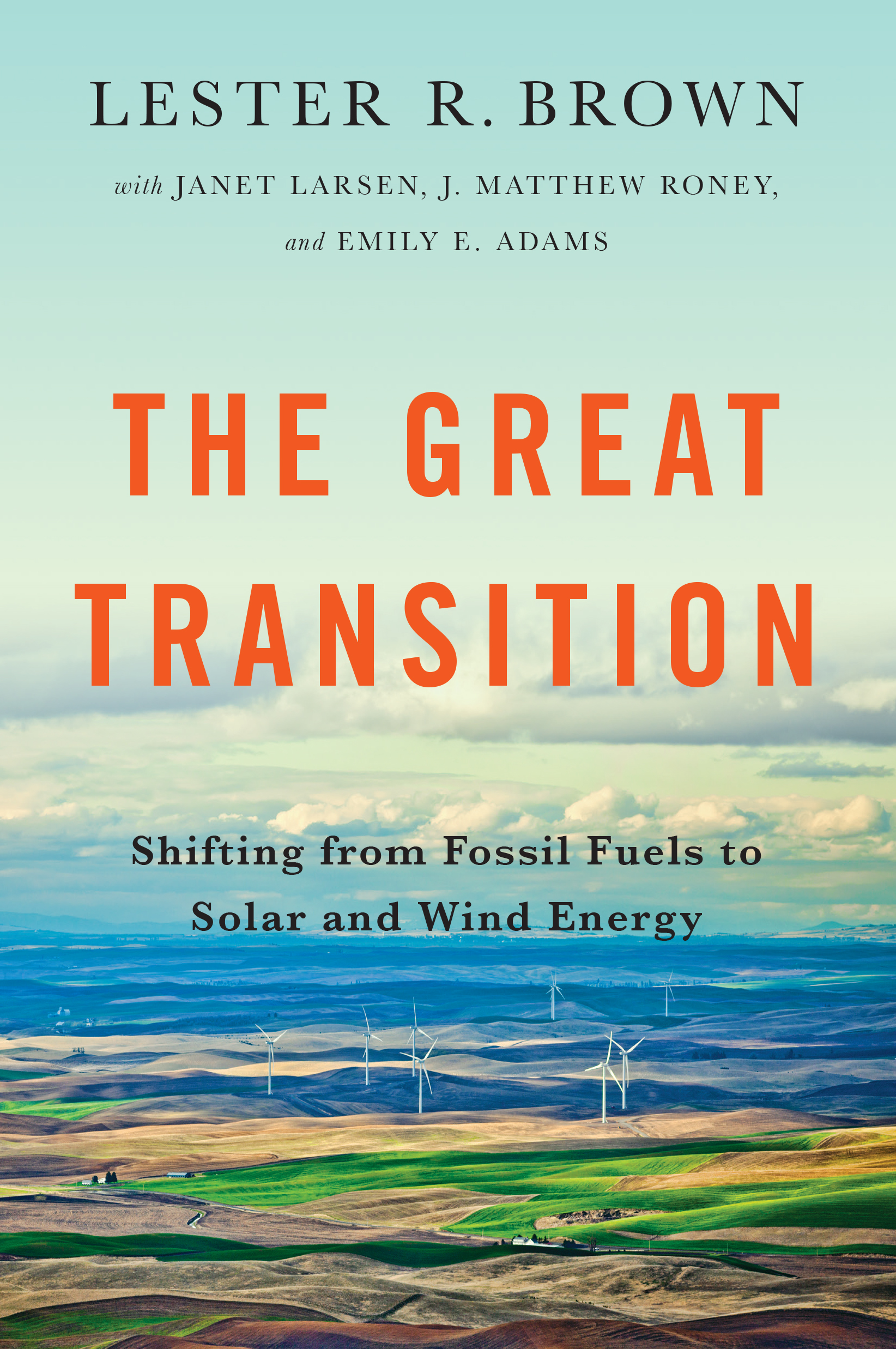 Zero carbon Nuclear ​​used to be a non-issue, but for any chance at this late date of staying under 2C, it is esssential
June 2015  VIDEO  A Fossil Fuel Free World is Possible: How to Power a Warming Earth Without Oil, Coal and Nuclear
6 June 2015
​NY Times Case for carbon tax
Sept 2015 Cities switching off fossil fuel energy 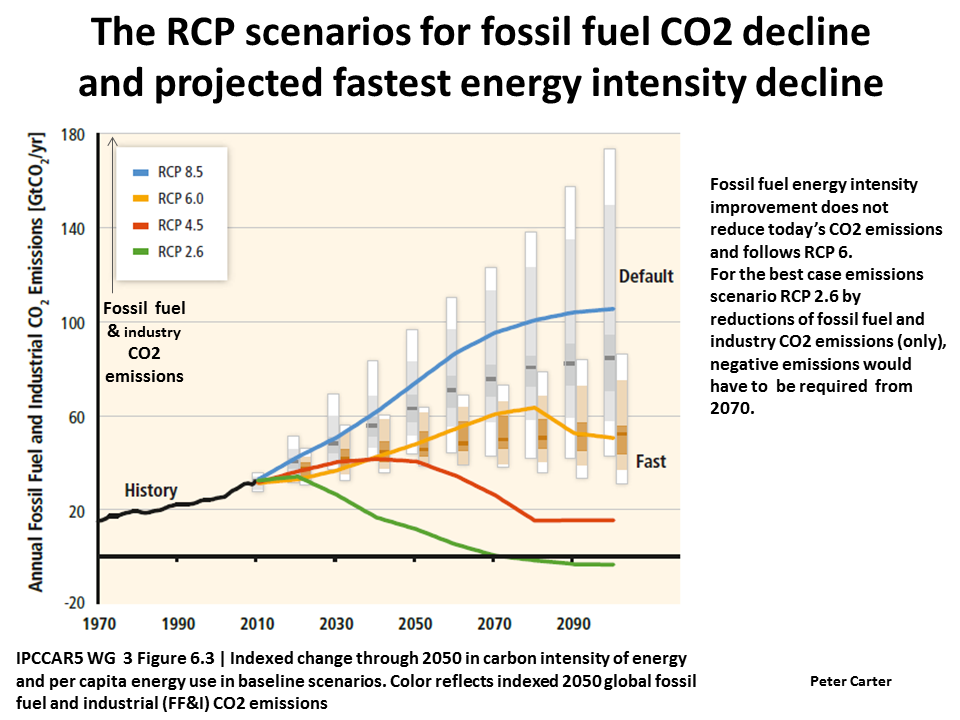 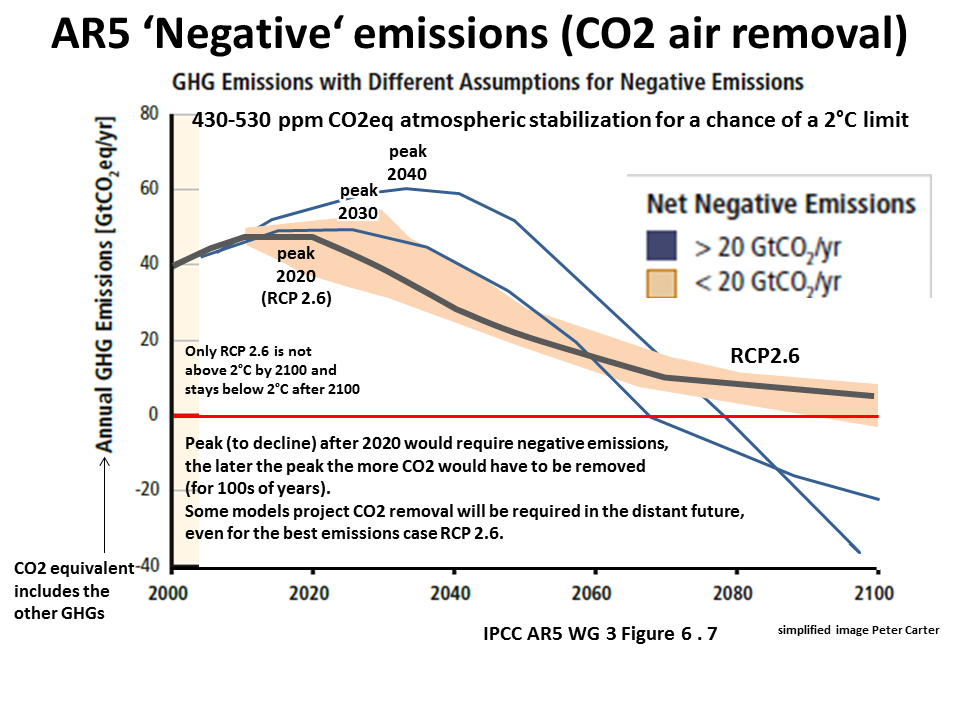 The effect of cutting CO2 emissions to zero by 2050 (T. Wigley)
​​based on Uncertainties in climate stabilization T. Wigley
Oct 2014 Ecofys
​Feasibility of GHG emissions
phase-out by mid-century
The position of global civil society (CAN Int. 2014) is 100% replacement of fossil fuel energy with clean renewable by 2050. That is the only de-carbonization for zero carbon
RENEWABLE ENERGY LIMITS Renewable energy production has been increasing well, but so has fossil fuel energy extraction.
Renewable energy can easily replace all fossil fuel generated electricity, but ​power for heavy industry and for transportation is another matter. Here high energy density is required and renewables (except for big dam hydro) are far too low on energy density.
Renewable energy is not going to be able to provide the power to manufacture renewable energy energy infrastructure for the zero carbon world​.
The only high energy and power density al​ternatives to fossil fuels are big hydro dams (but they can release methane after some time) and nuclear- fission and potentially fusion.
With continued R&D for renewables their energy density will no doubt be increased, but we can't wait that long  and we don't know if the increase would be enough for making metals and heavy manufacturing​
2015 VIDEO Cold Fusion is Real ! now called LENR 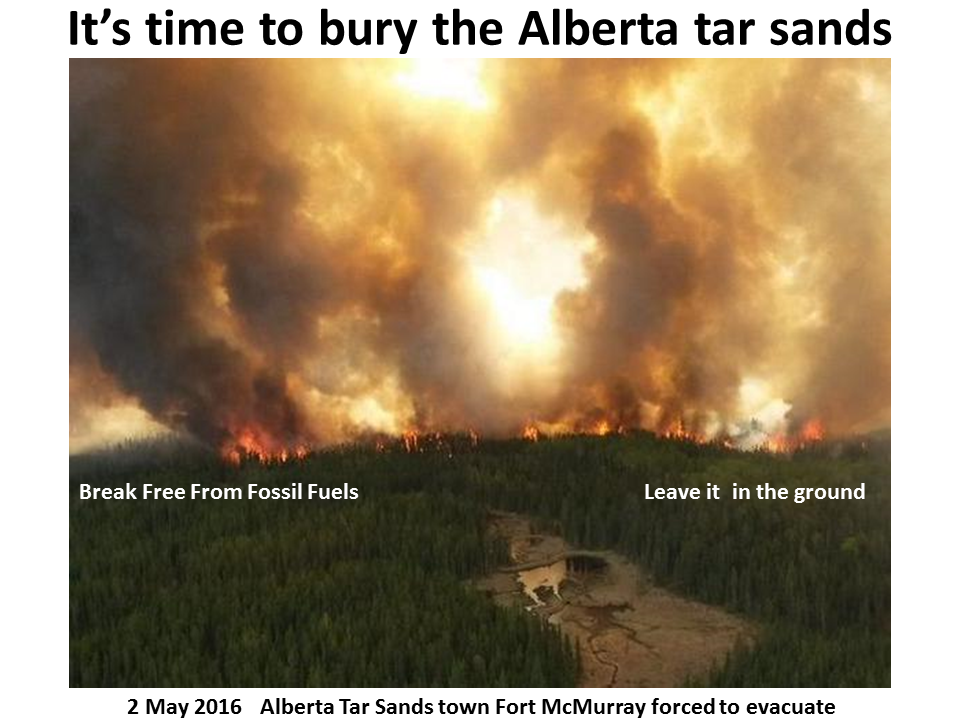 The future (only future), that is totally doable, is with vast amounts of zero carbon high energy dense safe power.
Now and for the foreseeable future it is not possible to get CO2 emissions down to 'near zero' (IPCC 2014 AR5) with clean renewables.  ​Clean renewable energy sources with the exception of deep geothermal and well situated solar thermal (that must be pursued to the maximum), cannot manufacture themselves.
​
Low Tec Mag solar ​thermal The bright future of solar thermal powered factories. This is an exclleent article but the solution offered does not get near zero carbon. Only if fossil fuels and biomass (see end of article) are changed to compact nucelar fission would it work.
​
Low Tec Mag Solar voltaic ​How Sustainable is PV solar power?